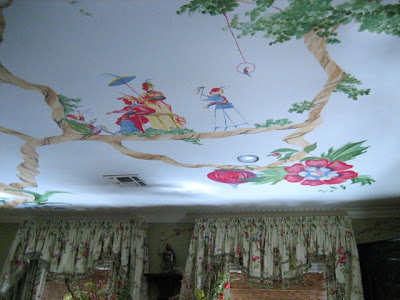 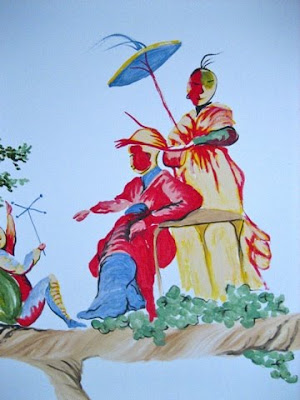 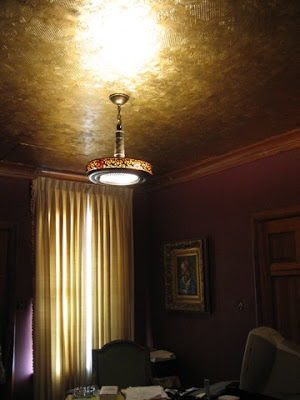 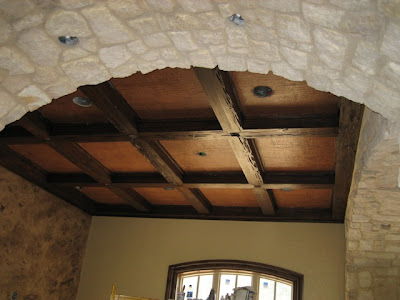 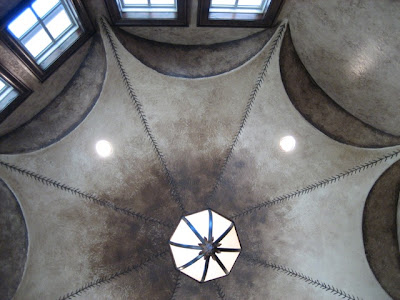 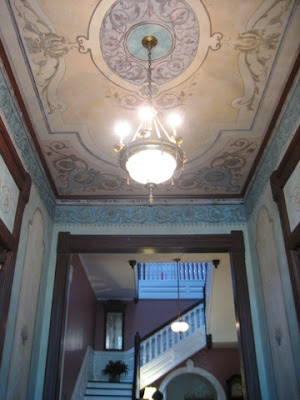 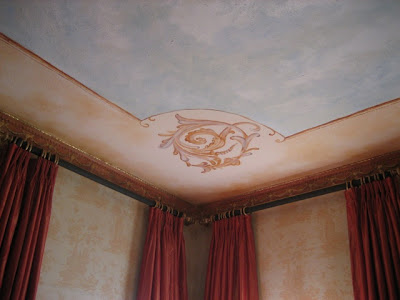 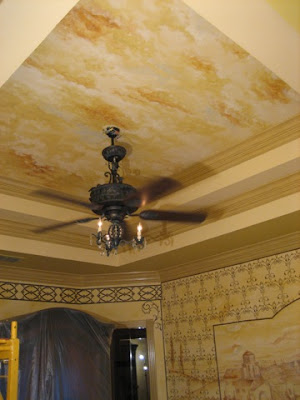 This ceiling done with sepia clouds finished the illusion of an Italian villa.
Think about it...when you lay in bed at night, what is above you as you drift off to sleep? Is it a neglected fifth wall ? Even if a solid color is the answer for your room, consider a shiny venetian plaster or a simple flat lime wash.. Don't overlook this important "wall" when you are feathering your nest and making your home your personal environment!
Posted by Theresa Cheek at 2:06 PM

Theresa-These are all gorgeous. I especially love the Chinoiserie of course.

Of course you do! Thanks Beth.

I saw your work at SR2 and wanted to tell you how much I appreciate your talent, your vision and your lack of fear of heights! So much beauty.

LOL! There IS a lot to be said for quality scaffolding! I have no fear as long as I am on good equipment. Thanks for stopping by.

Theresa, your work is just breathtaking. Plus, I love reading about each ceiling and your thoughts behind them. The first one with the travel images...that must have been such a treasure to the clients. Totally agree with you on the "fifth" wall -- it's an important area in every room...why leave it at blah?

Regina! Thanks for the nice comments! I see EVERYTHING as a potential blank canvas!

really interesting choices. Reminds me of my last trip to Rome - i had terrible neck pain from staring at all those fabulous ceilings! Lately, it seems like painted ceilings (not patterned) are really the rage. I support - down with popcorn!

Yes, popcorn ceilings need to go!
Lynne, thank you for making a visit!

Hi Theresa. Thank you for the visit and comment...and love this post about ceilings. I was in love with a particular shade of aqua after spending time on the Amalfi coast and discovering a beautiful Vietri line of pottery that shade. I put it on the dining room ceiling and it's magical (as a subtle low luster). What is the effect of going very dark on the ceiling (black and dark gray are "in" now)...will the ceiling appear higher...dark recedes? Trish

Hi Trish,
You are right! They actually appear higher. The only time they can make the room a little claustrophobic is when the room is not very wide. I think it is a great idea....I am sure your Vietri aqua is just lovely...

Oh fabulous ceilings especially the Chinoiserie ones but you would guess that I'd like those. I have visited this post a few times now, can't understand why I did not comment earlier. Lovely, lovely work as always