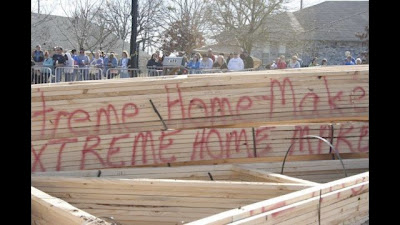 photo from ABC station KLTV
This week I participated in an Extreme Home Makeover project-the Carr family of Mineola, Texas. 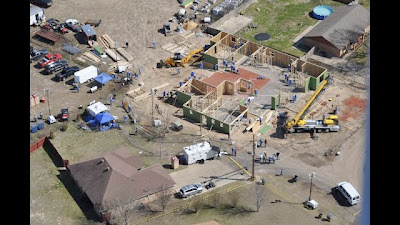 photo from ABC affiliate KLTV
The tv show doesn't begin to prepare you for what the staff calls "extreme time".....I drove the three hour round trip drive and worked on the site for nine and a half hours with hundreds of other "blue shirts"(as we were fondly referred to!)..and was the first one to leave on my crew! 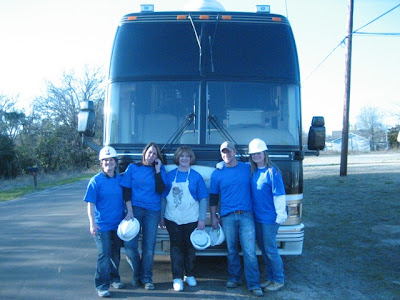 This was the crew I was on....great, hardworking professional people, two from Dallas and the rest of us from Tyler. 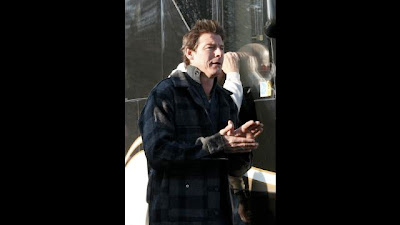 KLTV photo
Ty keeps up morale with his energy! 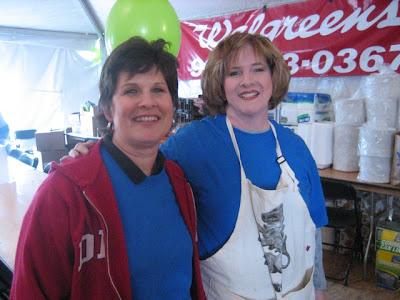 This is a photo of me and the friend who emerged me into "extreme time"... just on the day I was there (day three), the yard was leveled, a fence put up, driveway staked and poured, exterior walls rocked and I can't even begin to list what was accomplished on the inside. 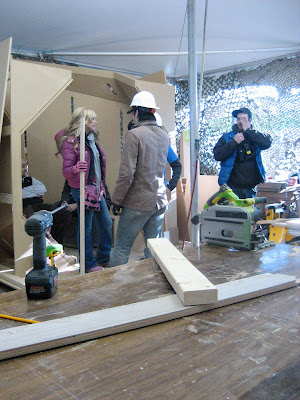 The day was filled with hard work interspaced with production shots for the show. 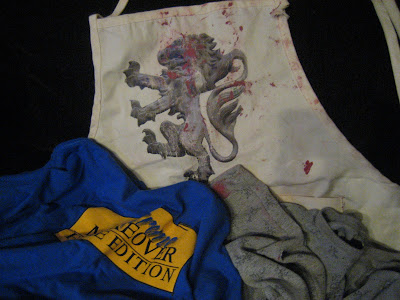 I can't give anything away before the May 9 air date. Let's just say there was a lot of red venetian plaster involved!
Posted by Theresa Cheek at 8:08 AM

You've always impressed me. Now you have wowed me! Can't wait to see your magic born from a generous heart.


p.s. I think I am becoming one with Word Verification. Today's word for this comment: redismes. I am beginning to think there is a higher power going on...or is it just me losing my light grip on reality?

How fun is that?? I really love this show, it never fails to bring a tear to my eye when they do the reveal to the family...

thanks for visiting me!
xx

HBD- thanks for your kindness!

Woohoo! I cannot wait to see the show and grin excitedly when your work comes on! [I swear I'm going to point you out and go "I know her. No, seriously. I know her."] Kudos, Theresa -- Extreme Home Makeover was lucky to have you on the blue shirt squad. :) Thanks for the teaser post...!

Regina! You probably won't see me on the show....just the red venetian walls !!

wow! Was it so fun? Was Ty really involved? i've always been curious about that. How fun. I must watch that one when it airs. do you know the air-date?

This will air May 9th!

How exciting to be involved with Extreme Makeover! Can't wait to see those red walls. I didn't know you are from Tyler. I have cousins there!
Also loved you post on Grottoes...I am ever enchanted by them.