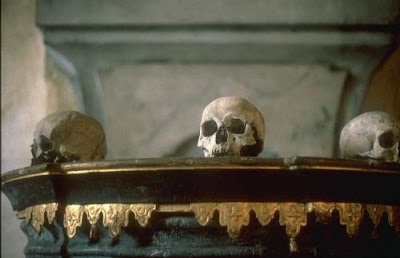 One hour from Prague is Sedlec, a suburb of Kutna Hora where the Church of All Saints is located. 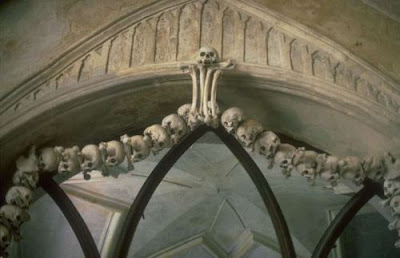 With Halloween approaching, macabre art is on my mind. The Czech Sedlec Ossuary began around 1400 to house an overabundance of buried bodies. 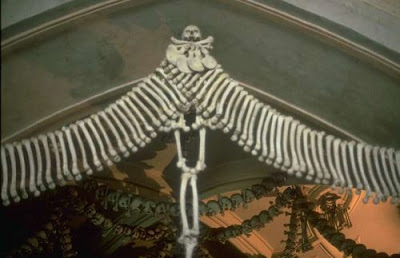 An ossuary is a final resting place for human skeletal remains and becomes a necessity when burial space is scarce. 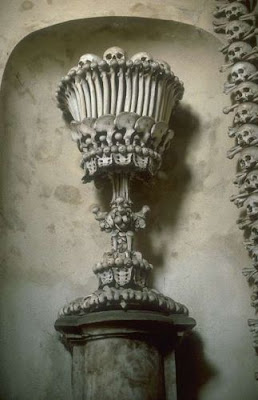 It is estimated that the bones of 40-70 thousand people are in the basement ossuary. 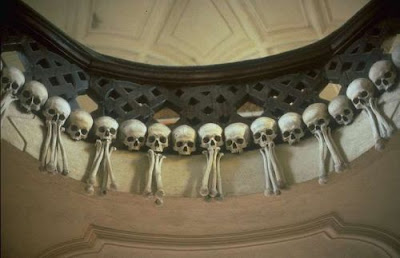 The bubonic plague and later Hussite Wars provided the bodies that now decorate the church. Wood carver and artist, Frantisek Rint designed how the bones would be placed. 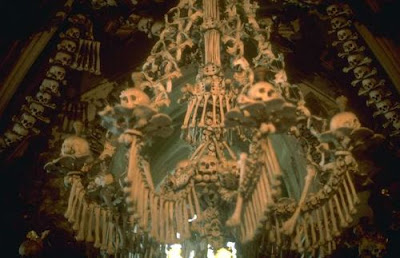 This chandelier contains every bone in the human body. You can look at this as macabre, but there is beauty and symmetry in the designs Rint created. I think I would rather have my remains used in this way than to take up space in the ground!
Thanks to the Berger Foundation for the endless files of photos of art around the world.
Posted by Theresa Cheek at 8:57 AM

What an unusual, incredible place. Thank you for sharing! I'm totally with you -- much better than being buried in the ground. :)

It's odd to see all the over the top horror cliches of halloween coming out and then compare them with the real deal of this post. Not just DEATH, but death organized and beautiful, almost Baroque with swags and festoons of our bones. That chandelier puts Damien Hirst and Milan design in perspective.

Well, I was just thinking this very morning that I hadn't heard anything out of you lately. I immediately envisioned you on scaffolding somewhere busy creating beauty. This is a most perfect offering for the month of October........very interesting. It does seem odd to say it but this is an amazing work of art. Prague is on "the list."

Regina-You are welcome! I think I want to be part of an incredible urn!
Roger- Yes,we struggle with the "finitude of Man"...and artists , I think, can make a bridge to help with that concept. Thanks for posting!

Patrick- It IS Baroque, isn't it? I thought the same thing. You always post very educated comments! Thanks for doing that.

D.B.- I am here! I still post weekly....and climb scaffolding in between!

Nice find Theresa!
I became aware early on, when a good friend of mine died while surfing, that beauty and death are very closely linked, in fact, two sides of the same coin. Without death there is no urgency, no poignancy, everything would blur into one gray undifferentiated mass. Given the weight of the subject, this lighthearted treatment is even more fun. God only knows what these monks had in mind when they created these wacky pieces- do you think they could ever have imagined we'd be sharing them like this?!

Steve,
So true....death DOES give life its poignancy. I try to keep this blog light, but I really believe there can be beauty in death...I just try to show that art and beauty can be found in many circumstances, if you look hard enough.

I agree with you, Theresa...I wouldn't at all mind being a bony part of a fantastical design. Sign me up! This was great...Thanks, T.
Catherine

wow. this is amazing. and unusual. to think that each one of these "objects" had a soul, and a story, and an impact on history in it's own little way and now it is "decoration". just proves that our earthly bodies are just that. bodies that will remain on the earth, wherever. and i wouldn't mind if mine was in a gorgeous chapel that is holy and sacred. that sounds like a good resting place to me!
i would love to see this in person.

The ultimate momento mori: going out on a limb for art. Personally, as a gardener, I'm going to be composted!

Oh this chandelier is sumptuous...well actually the whole place is..It took me a long time to appreciate momento mori art pieces but i confess it has an eternal charm..Thank you for this luminous post, Theresa ! :-)
Lala

Theresa, I do generally stay away from the macabre and going to the dark side!

These are fascinating though, very unique works of art.

I have a Luxurious New Giveaway on my site....Come and enter!!