The Stigma with Stenciling...... 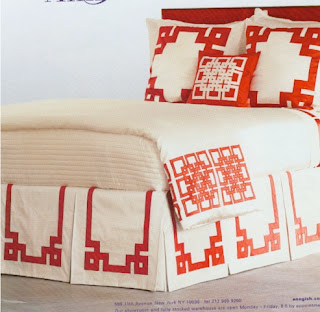 Photo of Ann Gish linens, unknown source
I recently needed a stencil with geometric lines to define the edges of a client's  mural from the unadorned walls around it.  I began to research motifs such as "greek key" and "fretwork" and decided on the look seen above.  I began to see this motif in the oddest places.....on buildings... 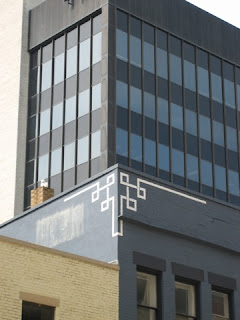 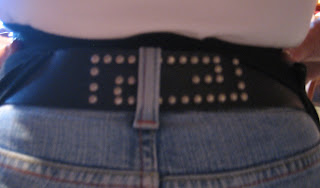 and , those lovely Ann  Gish textiles!
In college, I studied design, life drawing, intaglio and art history. It was understood that my work must be "original"with no short cuts or aids.  Under our breath, we serious art students scoffed at the art education majors that incorporated sponges and stencils in their projects......when was stenciling reduced  from an art form  to a craft?  When was stenciling equated mainly  with the work of  itinerate artists in the 1800's linked to early american  decor  producing rows of pineapples and  fruit on Hitchcock chairs?

The word  stenciling derives from the french verb estenceler(to sparkle) and the latin scintilla(to spark).   A stencil  is a template used to reproduce  a symbol or shape through drawing or paint in a uniform,  repetitive manner.  Adele Bishop and Cile Lord marketed the first stencil kit in 1968 for the masses. It included stencils based on designs from the 50's along with the paint and brushes needed to complete a project.  These kits could be compared to the current popular  ''...for Dummies " series of books teaching everything from how to use a computer to how to learn to cook. Bishop and Lord  took simple designs ( no theorem stencils here) easy for a beginner to use and made them accessible to the masses.  No longer did  the artisan control the market for stencil work.  The costs of elaborate theorem stencil designs had a competitor! Simple, repetitive designs done by the homeowner soon became the rage and the more expensive and laborious artistic interpretation began to decline.
I still scoffed at the use of stencils throughout my career,  the stigma with the whole  "craft" thing " bothered me.  Serious artists, in my opinion, just didn't use stencils! My attitude was about to change when I was asked to bid on a restoration job of turn of the century stencilwork in a local historical home. 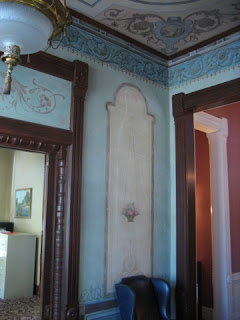 WOW! This was a dream come true! 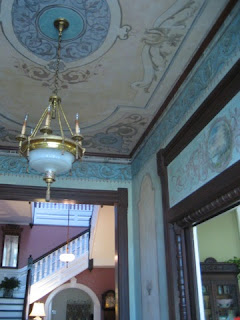 The entryway to this 1888 home was covered from floor to ceiling in theorem stenciling. The detail was incredible....well, what I could see of it. When I came in, around one third of the work was deteriorated. 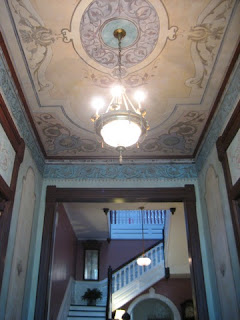 I had to make acetate overlays  of the intact designs to repair the areas decomposed. 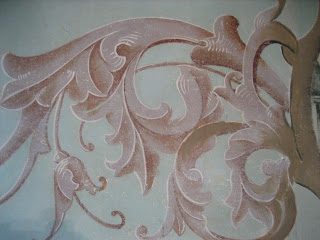 I used Farrow and Ball paint to repair the missing designs and touch up faded sections. My attitude changed overnight about the use of stencils! 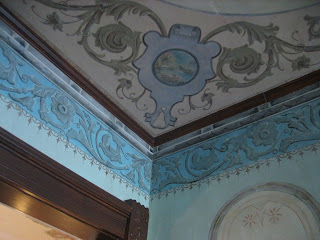 There was no space left unadorned in this entryway. History is sketchy on it's origins. It was not original to the home but was done sometime in the twenty year period between 1888 and 1908. 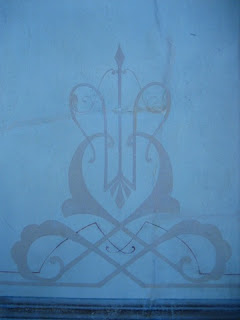 The complexity and composition is a work of art in itself!  The blue border around the top of the walls does not repeat! TRUST ME! It has some similar motif sections, but each wall has a distinct identity. 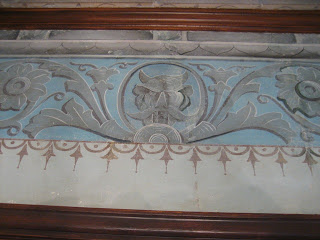 This was work done by artisans based on their standards. They painted many things that only a trained eye would be able to appreciate.  One day, when climbing the scaffolding, I was working about fifteen feet up near the ceiling. I looked at the small "nails" holding the blue ribbon and noticed a faint shadow painted for each nail! From the ground, this is not discernible but, it was painted because, the artist knew it would be there in nature. No corners were cut, no details were left out. It was a pure joy to work on this project and learn that stenciling can still be an art form, depending on who holds the brush..... 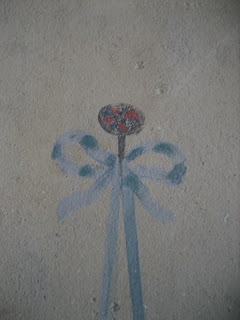 Posted by Theresa Cheek at 9:09 PM

what a nice job. i love working on rooms like that, both old and new. splendid post, thanks for sharing!

Oooooh oooooh, Im writing about your project for my blog right now. It is lovely to see it unfurl.
The soaps on your recent post look rather scrummy too. Will tell you when you are posted.

This house is a stunner, Theresa! All that work with the acetate overlays etc. must have been difficult but enormously satisfying. The results are beautiful.
I really enjoyed your memory of magnolia petals as 'canvas'. Southern girls at play. A movie director would snap up such an image!
All the best,
Catherine

so cool! the second photo of the embellishment on the dated hi-rise is pretty awesome

What a great project! Stencils are so misunderstood. Beautiful work as always, Theresa!