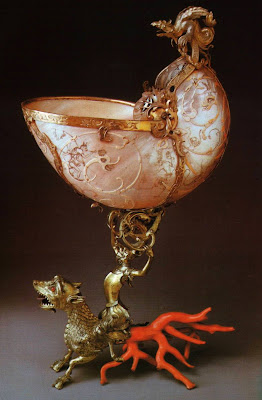 Marinni
Objects from the oceans have been elevated into art for centuries..... 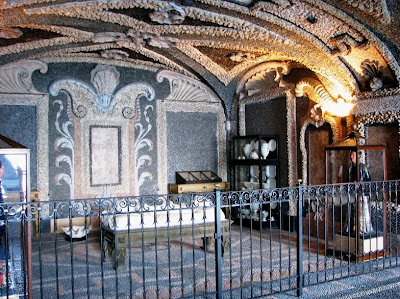 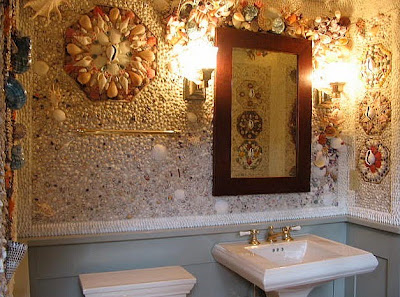 Blott Kerr-Wilson
Shelled rooms evolved from the love of exterior grottos.....these interior rooms were more formal with symmetrical designs...unlike the stalagtite inspired grotto art. This bathroom was inspired by Sailor's valentines...small , detailed shell designs-sometimes boxes, made by sailors at sea for their loved ones. 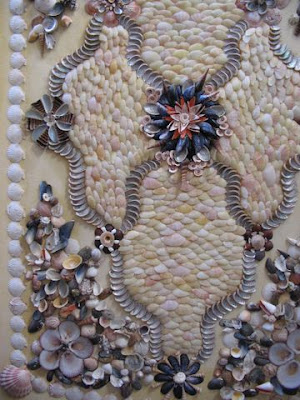 Artist Blott Kerr-Wilson has dedicated her life to restoring and creating these fantastic designs. Blott won the World of Interiors design award in 1993 and has seriously devoted her life to the creation and accurate restoration of shelled rooms. 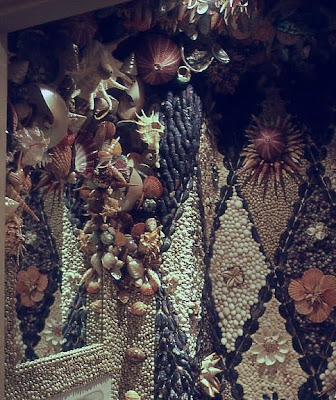 Helen Dillon asked Wilson to make the shells "flower" from the walls for this bathroom.... 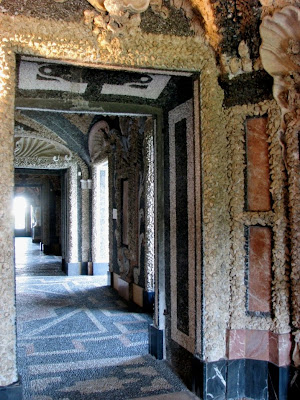 Viaggi-Cucina-et io blog
Many shell rooms include bone, precious minerals and corals along with the shells to create elaborate designs. 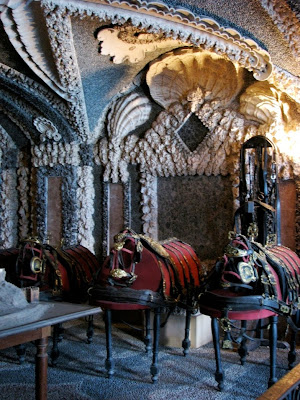 This exuberant example includes clam shells and arrises adorned with bone and shells. 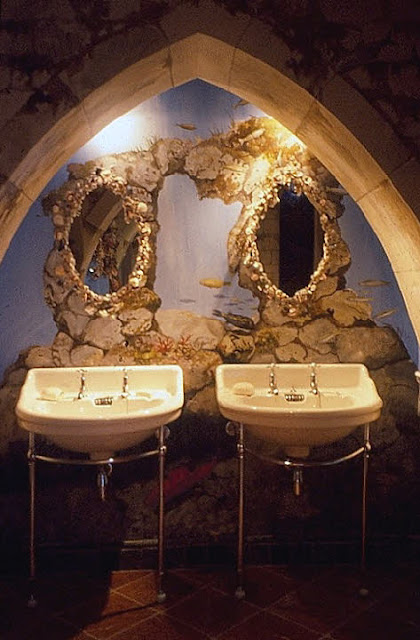 another example of work by Blott Kerr-Wilson is this grotto style bathroom done in conjunction with a mural artist.. 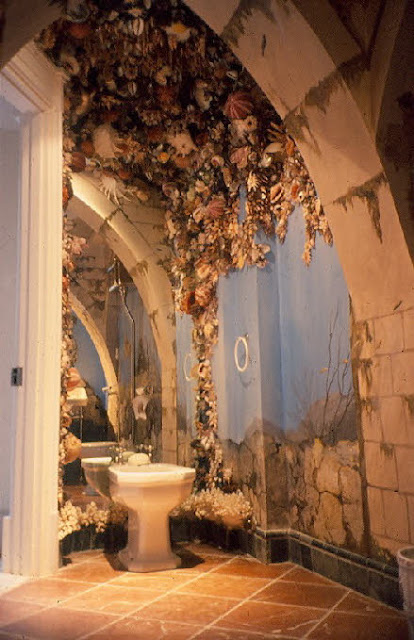 I love the fantasy of the ocean combined with the arched stone walls.. 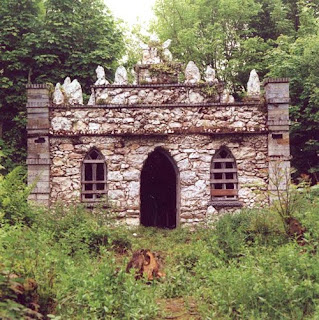 Cilwendeg Shell house- Pembrokeshire
Cilwendeg is another  folly that has been restored to its fullest beauty. 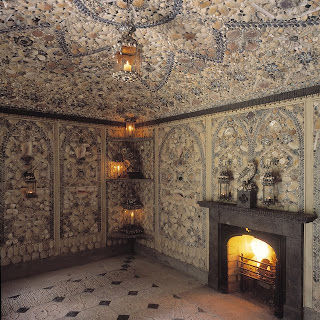 Cilwendeg
The dome was reconstructed using clues from shells buried in the area and sketches made based on similar shell rooms. 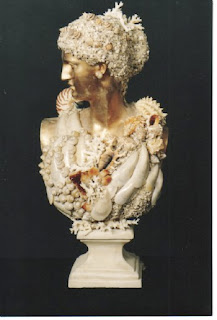 So, enjoy the ocean and its gifts.....whether simple or whimsical!

This post is dedicated to Lynne and Erling and their new life together.....you wanted a post on shell rooms....and I even managed to work in the word arris!!
Posted by Theresa Cheek at 7:26 PM

Oh. My. Gosh. I'm blown away by the detail in these rooms with their decoration in shells..... Amazing. Really! Loved this post. Have a great weekend!

Oh have I been away too long...this post is amazing. I am utterly fascinated with shells and grottoes. I may have been a mermaid in a prior life. I always learn so much here. And the faux inlay pieces you did are stunning.

I normally don't think of dusting but these shell rooms made me think of how would one tackle that assignment?

Thanks for sharing and have a wonderful weekend.

What amazing and wonderful spaces to wander into. I especially love the shells combined with the mural work. That's just like walking into a dream which doesn't realize it's in an awake world.

I'm with Jermaine, I think I was a mermaid in a former life... these shell rooms and creations make me swoon! I recently acquired a book called Shell Shock that reminds me of this post.
You are amazing Theresa... I just adore your blog :)

What a fantastic post! I favored the room inspired by Sailors' valentines...I am a romantic at heart.

I love shells art and decoration. I know a french fabulous artist and I wanted to write a post about her art. Very inspiring post

When I think of walls decorated with shells, I hear water drops falling somewhere, a somewhat eerie atmosphere. I imagine standing in front of a sink, trying to brush my teeth and hearing that drop-drop-drop of water, late at night.

Theresa, amazing details. A featherduster I think would be best!!

reminds me of fonthill!

I visited the most fabulous shell dining pavilion in the grounds of Chateau de Rambouillet. I must get my souvenirs and pictures of the recent Paris trip sorted and share with you.

You guys!!!! I love my posse of girls! Karena, yes, a featherduster would be necessary I think! Regina, I love that room the most as well. ;)

Amazing craftsmanship on that first cup, and even more on Marini's site. A wealth of information and beauty. Thanks, Theresa!

Patrick-Marinni is amazing...I think we all want the cup! ;)

Seriously, i had to stop looking at the nautilus shells on Marinni ! They're just one more beautiful than the other...Amazing post, Theresa!!
Thank you for the dream and inspiration! :-)

Lala,
Those nautilus shells are incredible works of art!!! Thanks for stopping in...your blog inspires me greatly!

fabulous! i am no inspired to get out the glue gun and try and make over my bathroom---

lotus.....sorry, the server got a little overwhelmed with several quotes hitting at once. I think it is straight now.

I would love to spend time in shelled rooms, although creating them would be even better!
Catherine

Bella Sala! I have always wanted to create a mosaic with the shells I've collected over the years. Just gorgeous! Catherine