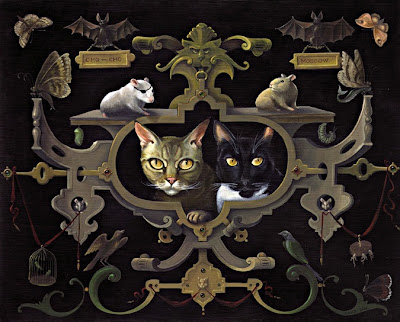 Adrian Card
Strapwork became popular in the 15th and 16thc through its use in grotesques and frescoes. 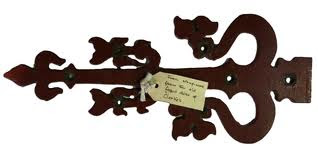 Taking its cue from actual metalwork, strapwork is a stylised decorative design mimicking leather, metal or parchment curled and woven into strips and bands. Adrian Card
Its use on musical instruments, mainly harpsichords, has kept it in vogue over the centuries. Adrian Card masters this art today...view his amazing work here.

Alison Woolley
This is a detail from a harpsichord design created by Alison Woolley of Florencearts. Just "google" the word strapwork and click on Wikipedia's definition....Alison's work is one of the illustrations! Strapwork is used to weave decorative objects together in arabesque designs. 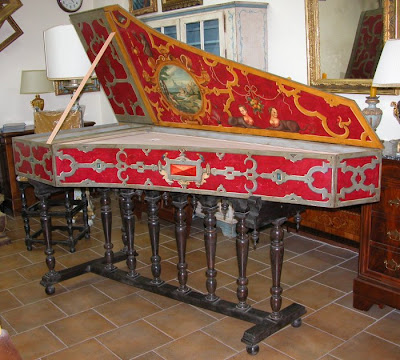 Its origins are in the arabesques of Arabs and Moors in Spain. 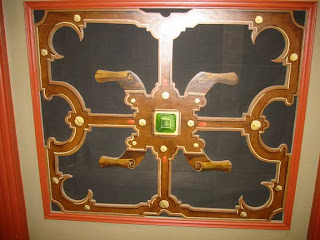 Rivets and cabochons complete the illusion....

Strapwork , carved in wood, was commonly used as borders and cornices in many Elizabethan and Jacobean buildings during the 15th and 16th century as well 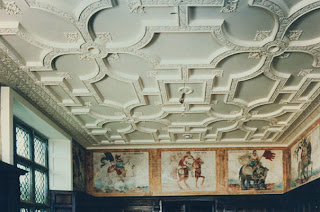 Ceilings at this time also produced fine examples of rollwork, or strapwork. 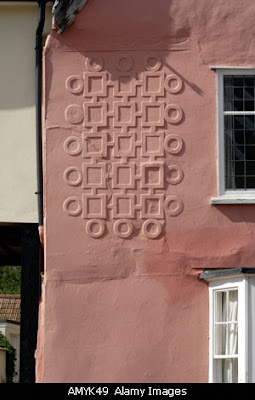 
Used in stone, here, it is carved into an intricate band design. 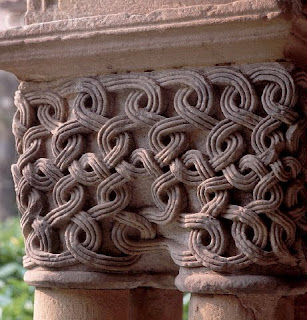 With a celtic twist, this is another example of strapwork. 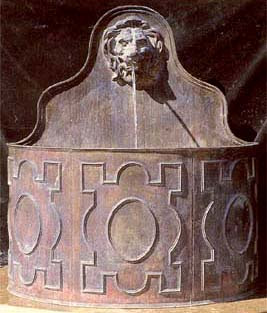 Victorian Ornaments and Designs by Samuel Leith is a great source for starting your own creation of strapwork!
Posted by Theresa Cheek at 9:16 AM

Very beautiful! I feel another obsession coming on!

Excellent post! I'm so glad there are people out there still doing this kind of work. It just makes me feel good. I love all your links too; I hadn't heard of Adrian Card before this. Thanks!

ahhhhhh, Alan, I just try to keep up with YOU! LOL! Glad to inspire you a little today.

I second Alan- I'm off to visit your links!

Theresa, I love how sharing our knowledge and interests educates us all. This post was perfect after the project I just completed- reinterpreting a 7th Century bronze pierced flame pattern becomes a kind of strapwork...?

as you might imagine the meeting of adrian and alison last month was epic. it was like reuniting long lost twins.

Penny-so true,,,,all of the arts compliment each other in so many ways,

Patrick-yeah, it also reminds me of fretwork

Lynne,
I can only imagine how that went! You were wonderful to organize it all.

Very interesting, love it!
Thank you for all your good posts!

Hey Theresa thanks for posting this I haven't revisited strapwork for quite a while. Very nice! I love Adrian's panel that you started with, I hadn't seen that one. Loved Adrian too!
Alison

Thanks Alison! Glad you stopped in to read this!

The only thing more enchanting that this "lecture" is the one-eyed mouse in the top panel.

What wonderful gattos!
I'm in love...

I was talking to a new artist friend about Alison yesterday. If I had read this earlier I could have introduced her through your blog. Darn. Lovely examples. The Elizabethan fireplace is just like the stencil in my Jacobethan room.

Theresa, fabulous post as always, and I am now officially addicted to strapwork!! What fun getting to know you watching Adrian sample his techniques this last week.

After googling "Strapwork" your blog was high up on the list! lol

Thanks Tamra! It was a fascinating class last week. Such a pleasure to work with you and Katie.