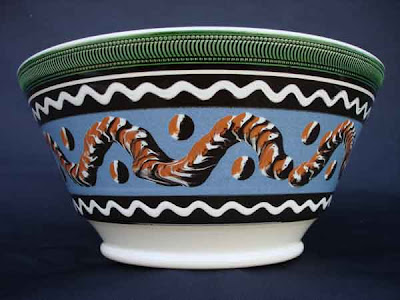 Source
Mochaware-Mocha: Cream- or pearlware decorated with vibrant-colored bands into which tree-like (dendritic) or other effects are introduced. Used in taverns and home kitchens. Named after mocha quartz.
I fell in love with mochaware the first time I saw a piece in the 1970's. What's not to love about the bold colors, and serpentine designs and swirls? 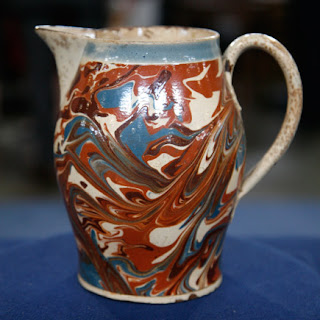 Source
Glazes are allowed to swirl and mingle reminding me of marbled papers.

source
Mochaware is most known for it's serpentine, or earthworm designs. 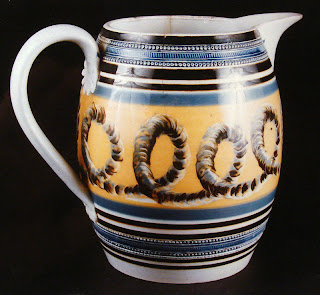 source
What makes the designs so three dimensional, is the way the glazes are applied. Two to three colors are poured into a tin with a spout, The colors are separated with metal walls and come out through the spout at the same time to create highlights and shadows of the design. 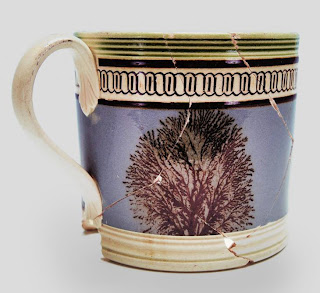 Dendritic designs are also common, forming tree like or seaweed shapes made when the glaze fans out . "mochaware was never intended as art. First made in England in the late 1700s, it was utilitarian pottery, used in taverns and modest homes. Simply put, it was the cheapest decorated pottery one could find. By the early 19th century, it was imported into America and was later produced here."(source)
source 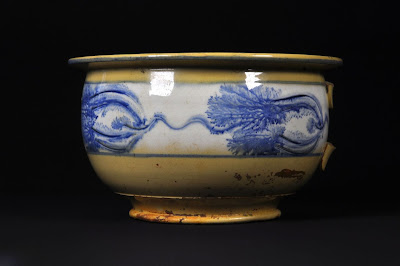 source
"Most people assume that mochaware is so named for its palette of browns, creams, grays, blacks, and muted tones of blue, green, pumpkin, and yellow. But the name derives from mukha ("mocha") stone, a type of moss agate from the Yemeni city of the same name. The stone features natural striations similar to the wares' seaweed and tree-like decorations... Owing to daily use, few examples of mochaware have survived over the years, making it a rare American collectible."(source)
I am always on the lookout for a piece to rescue at a flea market.,,sigh...no luck yet!
Posted by Theresa Cheek at 9:27 AM

Again no idea of such a thing existing, a stone, a name, a color, you always surprise me!

When I started my antique business in 1996, I bought in UK.

I purchased 2 mochaware mugs similar to your pictured mug with seaweed and only now, reading your post, did I learn how the mochaware pieces were made.

I knew I loved them and now I understand their beauty.

Thanks for another education!

Nance,
So glad this is timely for you! I have always loved mochaware.

I'm really drawn to these pieces, Theresa. I find them charming and in some ways quite contemporary. The ones with bolder colors could be from the 1930s and 40s, I think.

reminiscent of ancient med.culture.thank u!

I'd snap these up in a second. I especially like that last bowl!
Catherine

How beautiful...love the last piece with the blues!!