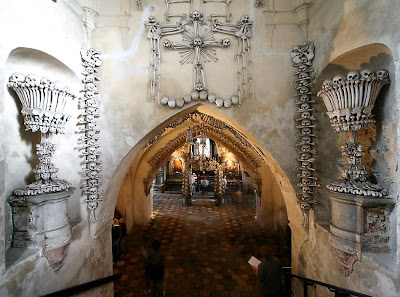 
Last year for Halloween, I did a post on ossuary art-macabre at  its best! During the plague, there were so many dead, they could not all be buried and the bones became an issue. 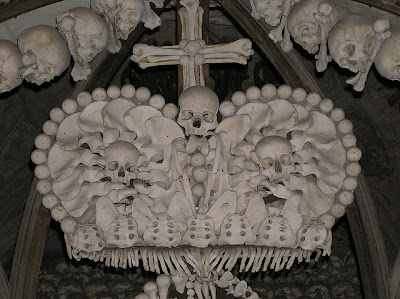 Near Prague, the Sedlec ossuary is a macabre display of human bones in decorative use. 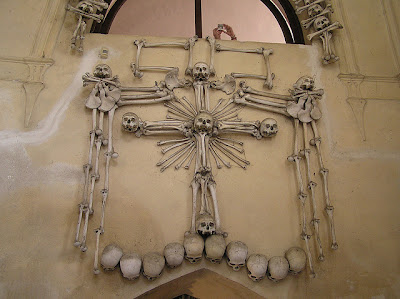 Bones from the bubonic plague and later wars now decorate the walls of the ossuary. 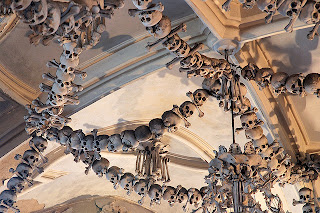 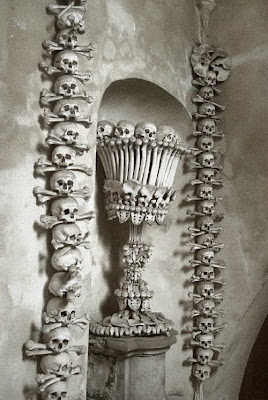 
...and niches of the Sedlec chapel. 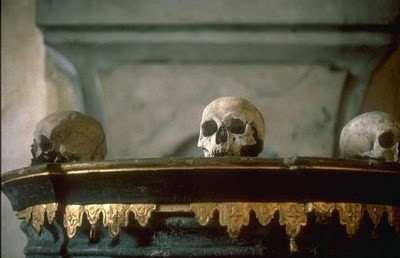 I think it was a dignified way to handle the situation. There is beauty and symmetry in the human form and the skeletal system. 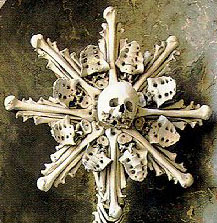 source
Beauty...and art, can be found in many unexpected places! Happy Halloween!

Posted by Theresa Cheek at 4:53 PM

I agree that it was a dignified use of the bones. The designs are beautiful.

I will do a post soon with more photos of the tablecloth for you and Gina.

Theresa have you ever been there? i've never made it to sedlec.
i did get to see the Capuchin Crypt in Rome once. that's a good one as well.

Eerily interesting...
After a while, the bones probably became just items to be used to create the designs.

No, Lynne, I haven't. I would love to see Rome as well.

Once I am over the strangeness of this I think it is actually a very vivid memorial to all those that have gone before. Each skull is a person and the message hits home much more than a single symbol for all.

absolutely amazing....my first reaction was chilly but the eye then only sees harmony and adornments...
Happy Halloween to you Theresa !
Lala

Hi, Theresa - these photographs remind me of the movie Mondo Cane. Did you ever see it? It shows how cultures around the world look at things from very different perspectives, and the care of bones is one of the movie's many subjects. Well worth checking out if you haven't already seen it.

I've been there, years ago in 1994 - swallows had made nests in some of the skulls & arrangements & were darting in & out of the windows, adding to the moving beauty of the place. What a brilliant, & I agree, dignified way to commemorate the many who perished.