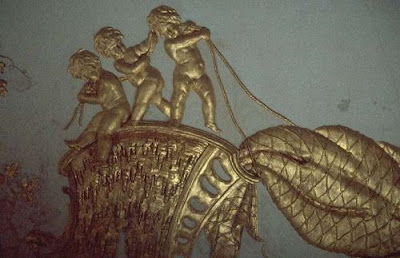 As many good things often do, Baroque architecture originated in Italy...early 17th century saw the beginning of a new, lavish ornamental style...... 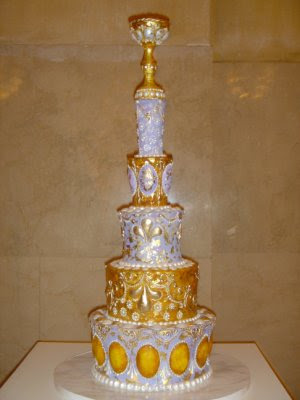 I always think of Baroque when I see a Margaret Braun cake! Her designs are so over the top, every inch treated with ornamental decoration. 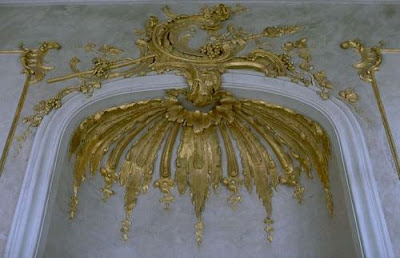 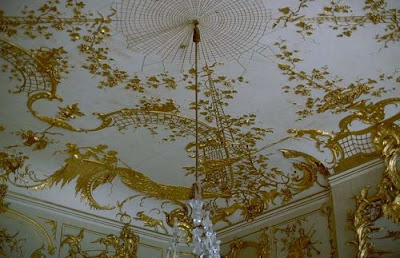 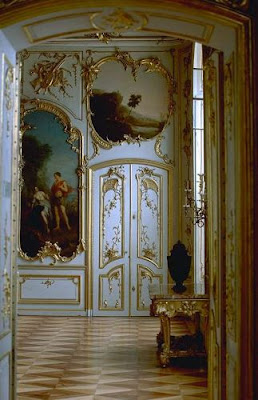 The blending of painting and opulent architecture were characteristic of the Baroque era as seen here in the Sanssouci Palace, home to Frederick the Great, King of Prussia. 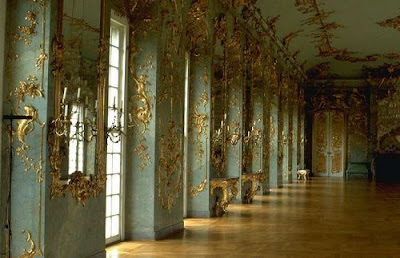 Schloss Charlottenburg in Berlin, the largest surviving royal palace, was designed by Georg Wenzeslaus von Knobelsdorf.  Knobelsdorf studied in Paris and Italy and came back to Berlin to create Frederickian Rococo. 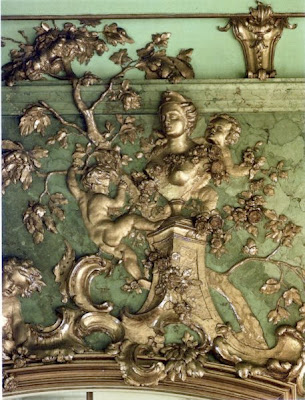 This Rococo style was a continuation of the Baroque influence. 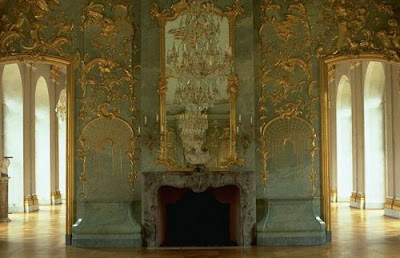 Every surface was treated as a potential canvas for decoration. 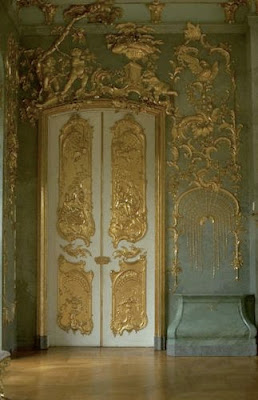 Elaborate scenes were carved from plaster and gilded spilling over from walls to ceilings. 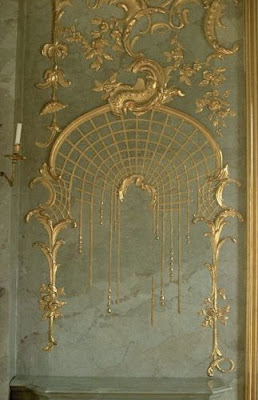 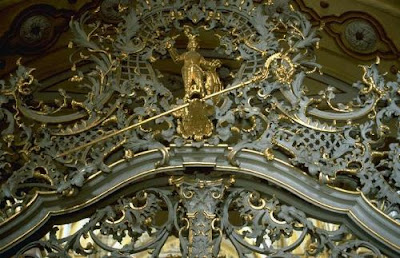 The shell shaped curves were also seen in porcelain with gold edging many times over a mirrored background. 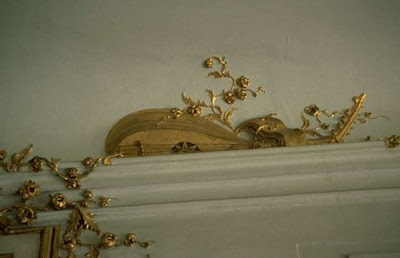 Baroque artists gave us glorious detailed ornaments.  Adding beauty though dimensional carved ornament and using piping bags to create vines, flowers and trelliswork, they were the cake decorators of  Baroque architecture.
All photos (except the cake) are courtesy of the Berger Foundation.
Posted by Theresa Cheek at 7:15 AM

Mmmmmmm Baroque architecture. The combination of heavy, intricate painting and the lightness of all the Baroque ornamentation at Sanssouci is delicious. And the parquee floors!! So much texture, so much pattern, so much richness to digest.

Lauren,
Thanks for stopping by,,,your comments mean a lot to me! I think your blog..and your mind are way ahead of your time :)

Devolution defined: that was then, now is cottage cheese ceilings, almost always painted white. And they call this progress? I think you and Lauren together on a project might help even the score, though!

Cottage cheese!!LOL! This is what unionization got us! Things have changed....

so Roccoco is more elaborate than Baroque?

Oh Kitty! You've opened a can of worms! These pictures are a mix of both styles....typical of any period of evolution of style, there is no clear cut stopping of Baroque and starting of Rococo, they continued to influence each other...BUT, it you want an answer, Rococo was actually considered a lighter style, known by its use of shells and curves and usually lighter pastel colors. Baroque is always the heavier, more elaborate design.

Theresa, it's such a joy to read your blog this morning...
i've always been in love with baroque. it is quite a joyful style after all...
Thank you for this post !

ps : you really make me feel like going to eastern Europe..it's a long time i visited Schonnbrun and i'd love to visit Sans Souci palace...sigh

Thank you Lala! I feel that eastern Europe has some incredible art that does not always get exposed to the world.

Another fascinating post! I linked to you in a post I just did on antique vellum books and the marbleizing that appears of some of the volumes. I always learn something here. Thanks, Theresa.

There's a lot of baroque around Vienna, but I have never seen a cake as elaborate as Margaret Braun's (Martha Stewart, eat your heart out!).

Thank you for visiting my blog and your kind comments. I am looking forward to seeing you again!

Oh I love not only Baroque, but I love its costumes, music too. Luckily Istanbul (where I'm from) hosts many different varieties and gorgeous examples of Baroque architecture, even Neo Baroque ones.

Thank you Nihal for visiting my blog.

I love Baroque and have studied French Baroque dance with a master. So feminine...and, well, golden.

Catherine,
I can see you dancing in a golden aura....fantastic!