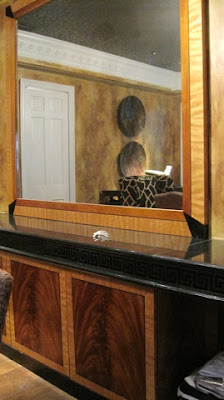 Mad-Men, the 60's inspired drama on AMC, has brought the glamour of the 60's to the forefront again. 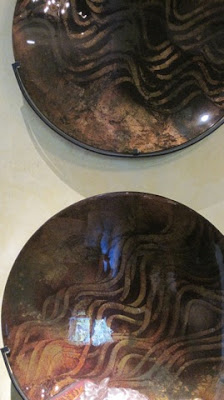 When I walked into a new job recently, I thought immediately of the show.
Looking at white walls, I was told to use these glass plates as my inspiration for this dining room. 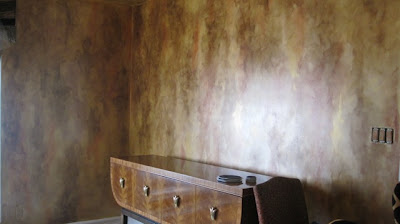 Wall colors and style came from the three biedermeier pieces in the room.... 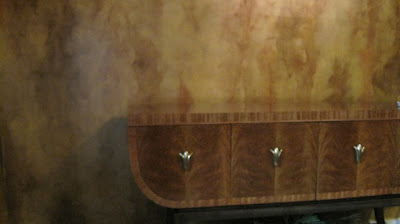 I used the flame design in the crotch mahogany of the sideboard and built-in on the opposing wall to determine the wall's six colors and direction of movement. 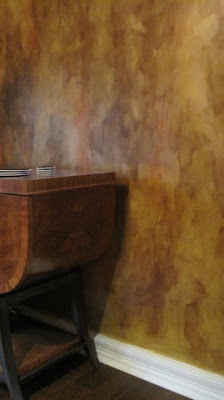 This room went from blah white to rich, wood tones with the use of metallics and satin paints. 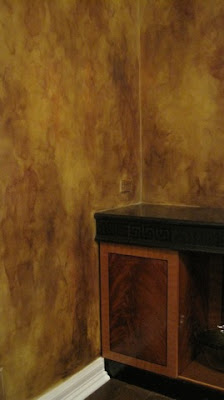 There was now a masculine feel ...rich, dark and sophisticated... 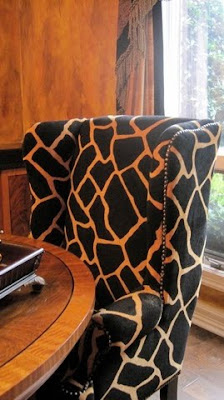 Taking a cue from the two end chairs, now it was time to address the white ceiling! 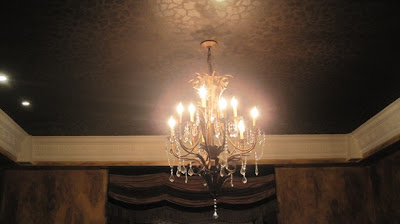 Using a  flat base color called "mink"(Benjamin Moore), the ceiling was transformed into a subtle giraffe print. 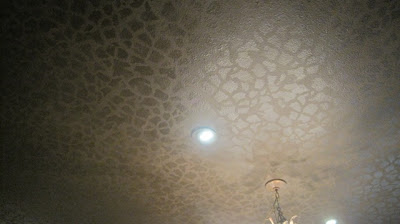 Mink was applied in a flat finish, and then in semi gloss  to stencil the tone on tone giraffe pattern. 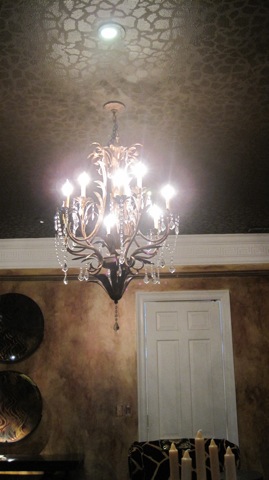 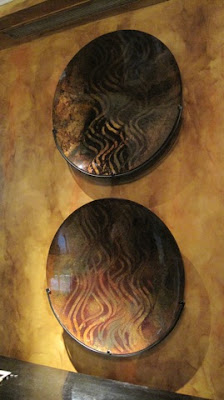 Here is a before and after.....the plates now seem at home with the biedermeier  and the room has that Don Draper drama!
Posted by Theresa Cheek at 6:45 PM

Teresa! This has so much glamour and integrity. I am abject with admiration.

All we need now
is a very cold
and dry martini
and some cool tunes!
Love what you did....
A LOT of work!!
xx Suzanne

Such beauty. You got the feeling so well. I am in awe. Bravo! Job well, no super well done. The client must be ecstatic!

I love Mad Men, it so epitomizes my style, wish I had lived back then! That paint job is absolutely amazing, you are so talented! Love your blog, happy to be your newest follower!

Now this room is fun and dramatic. It must have been very boring before!

Amazing...you are so gifted Theresa. What a talent.
Lee

You worked wonders with that room, bravissima!

I miss Benjamin Moore paints, I truly do,
especially their "Linen" color.

Wow, Theresa, That room is so beautiful. Amazing work on the wall colors. You sewed everything back into itself - furniture, art and room are all now humming the same level of energy!

So rich and lush and, did I mention - superb? What a labor of love. Perfection.

Love this: elegant, rich and unique.

V.glamorous. I love those walls. Thanks for leaving me a comment just now. I was just about to visit your blog when you appeared on mine!