Pargeting derives from the word 'parget', a Middle English term that is probably derived from the Old French 'pargeter' / 'parjeter', to throw about, or 'porgeter', to roughcast a wall. (Source: Webster.) However, the term is more usually applied only to the decoration in relief of the plastering between the studwork on the outside of half-timber houses, or sometimes covering the whole wall. (wikipedia) 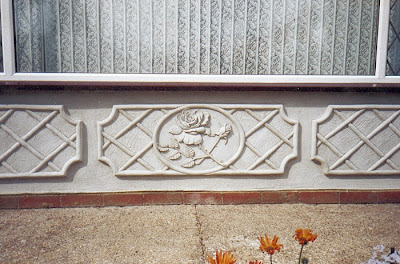 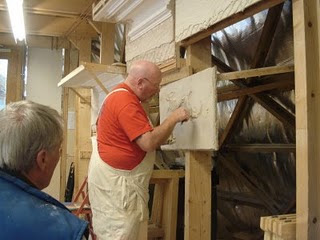 source
I have conversed in the past with Bill Sargent, a master with the art of pargeting. Almost a lost art, Bill trains "lads" in the craft in England.

Bill Sargent is amongst the highest regarded pargetters (also spelled pargeter) in the country. His work can be seen in Suffolk, Essex, Kent and Norfolk and covers most areas of Conservation Plasterwork and pargetting (also spelled pargeting). This includes conservation plastering for listed buildings, Lime washing, Lime plastering (mouldings etc.) Arches, Lime floors and Brick stone and slate work. 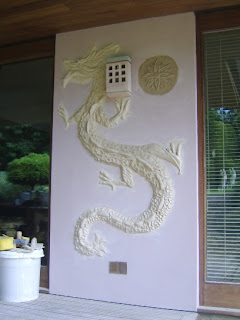 Bill Sargent
Bill is a very generous man with his knowledge and loves sharing his passion of pargeting! 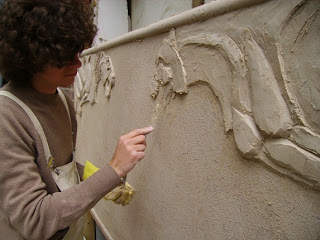 source
He teaches his passion for the next generation to be able to restore and maintain  early pargetting in England and surrounding areas. 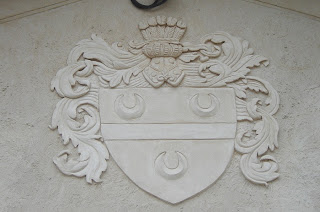 source-Ian Warren
For a while, Bill had me convinced I could conquer the world through pargetting! He corresponded with me on technique and tools... 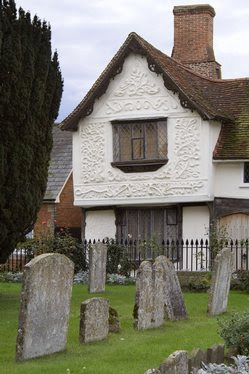 wikipedia
I do use lime plasters  and holding a trowel is very familiar to me, but his level of work is meant for the serious student. 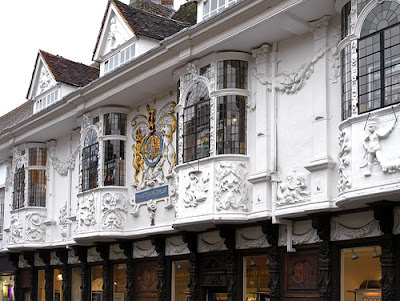 Ipswich
So when you see the fanciful decorated houses with ribbons, animals and heraldry, you will know it is pargeting! 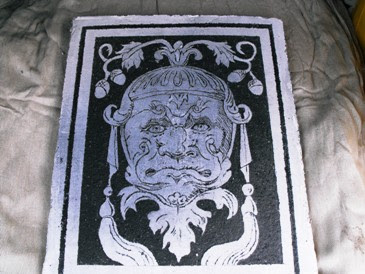 source
Bill also works with sgraffito...but that is another story!


**I think Regina Garay (Fauxology) and I were separated at birth! We often blog (and pin) the same or similar subjects. Here is her post on pargeting.
Posted by Theresa Cheek at 9:53 AM

Before my love of France, I traveled to UK 5-6 times each year.

I have passed by buildings as you posted and never knew the story behind the wonderful designs.

You are an educator! Thanks.

WOW! What a master. The work is beautiful. -t

Dear Theresa, This is a most interesting art form you have introduced to us. Why not learn from the Master. I know that you could do it. I think that your clients would love this technique if only they could find someone who could execute it.
Thanks for sharing and always bringing such interesting artists and techniques to us.

Gina, thanks for the compliment! I could do a fair job, but I am not so good with 3-D stuff. I will stick to making things look 3-D with paint!

Fascinating post, Theresa! I have never even heard of pargeting!

Hi, Theresa - Thanks for opening up a whole new world to me. I went to all the links and especially enjoyed seeing the hares and greenman motifs of Joe Pattison, Now I want a greenman on my house!

WOW! Who knew? Just another way you improve the world.

i love my wee wooden house but if i had a stucco exterior you KNOW it would be complete caked in pargetting and sgraffito. nice post, theresa! thanks

How? How did I miss this blog??? I adore Bill Sargent's work...a dream come true would be to train with him some day.